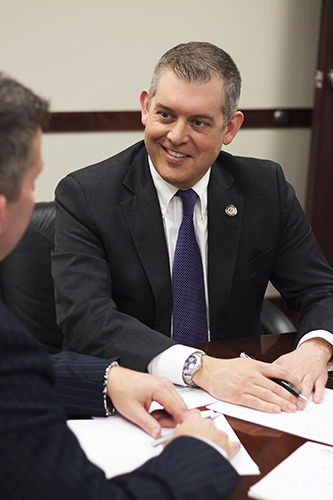 Christopher Galloway was sworn in as our Lake County Auditor on April 1, 2019. He was appointed by Governor DeWine to replace Ed Zupancic who retired after 32 years in office. Since becoming Auditor he has focused on increased fiscal transparency, technology upgrades and implantation, and returning more funding to our local schools, cities, villages, and townships than ever before.

Christopher Galloway served for over 14 years as a Concord Township Trustee. He was first elected in 2005 and re-elected in 2009, 2013 and 2017. Concord Township is now the largest township in Northeast Ohio (population ~19,900) with a $12 million annual budget. Christopher has made economic development and government reform his priorities as a trustee and now Auditor. As a trustee he was responsible for negotiating and implementing a Joint Economic Development District with the City of Painesville. The Concord-Painesville JEDD won the 2011 Plus Award from TEAM NEO for Regionalism and Cross-Border Collaboration. Chris currently serves as Chairman of the JEDD Board, after previously serving as Treasurer.

Christopher Galloway is 48 and resides in Concord Township. He has one daughter, Brittany, who is pursuing a bachelor’s degree in Interior Architecture at the Cleveland Institute of Art.